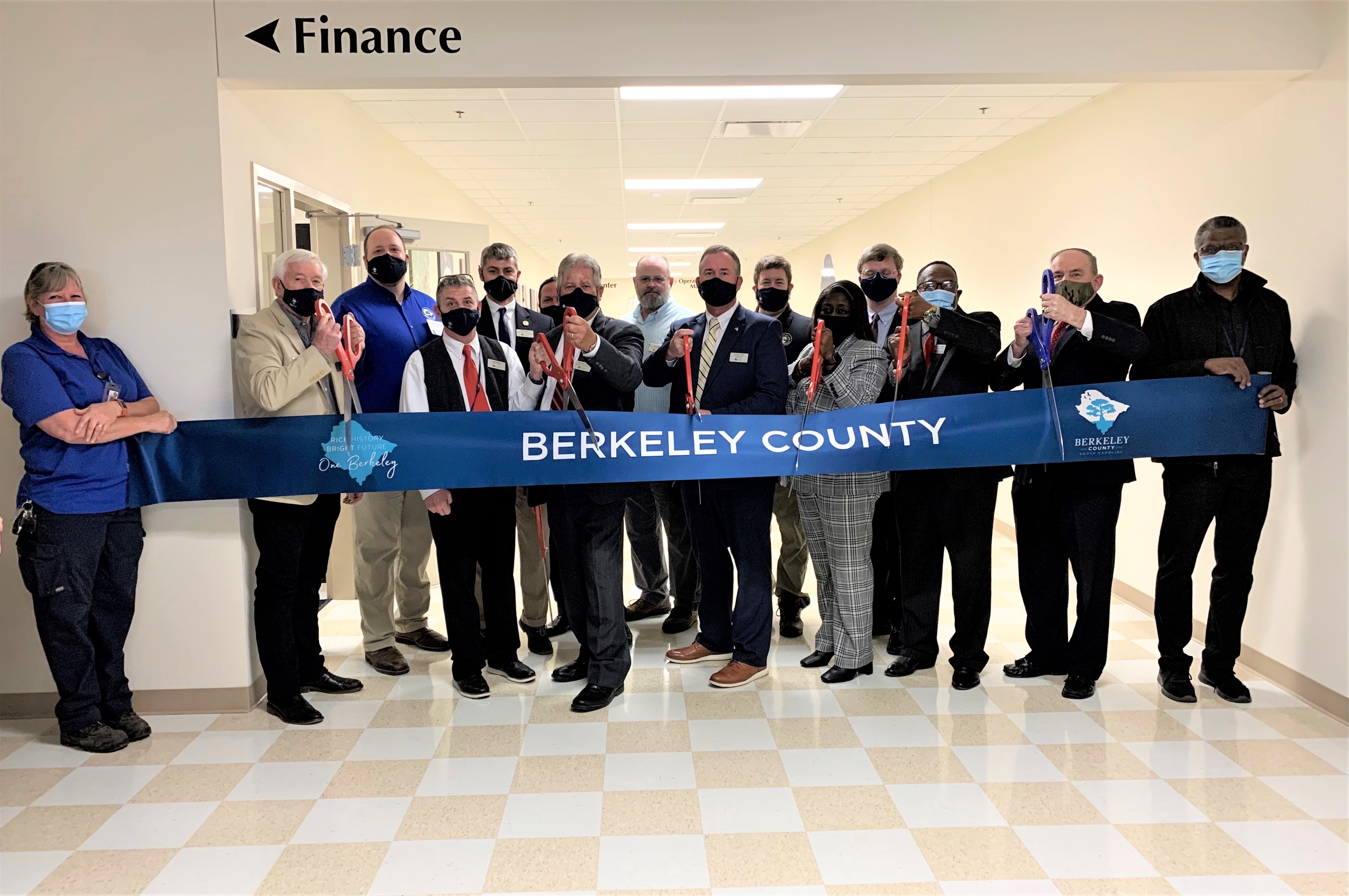 MONCKS CORNER, S.C. (Tuesday, February 23, 2021) – Berkeley County’s new Administration Building expansion is officially open to the public. Together with local leaders and elected officials from across the Tri-County and state, Berkeley County Council members and administration cut the ribbon on the expansion Monday, February 22, and celebrated the completion of the long-awaited project.

“This is an unbelievable turnout. …We appreciate the support,” said Supervisor Johnny Cribb. “This is awesome. It means a lot to our employees that work really hard on this project, our staff that’s going to work in this building, and more than that, the folks of Berkeley County that are going to be able to benefit from this facility. …Every strip plate, everything that you see done was done in-house (by) County staff and it’s been done late at night. …We’re really proud of this facility because like the DMV, it’s not full on Day One; there was a lot of future forethought to this project.”

Supervisor Cribb also praised Choate Construction for their hard work on the new 30,000-square-foot facility, which is connected to the current Berkeley County Administration Building, located at 1003 Highway 52 in Moncks Corner. The expansion centralizes multiple County departments and will house the S.C. Department of Motor Vehicles this summer. SCDMV is scheduled to move from its current location at 108-B Highway 52. To praise the project, Col. Kevin Shwedo, Executive Director of SCDMV, served as a guest speaker at Monday’s ceremony.

The project is the culmination of years of planning. It was also actually halted for a time while County Council, leaders and staff reimagined the initiative in order to cut costs and include more aspects that would better serve County employees and the public.

“Prior to me getting here, one of the biggest things that happened was County Council in 2018…wisely shut it down and we regrouped,” Supervisor Cribb said. “There was no EOC, there was no 911; in fact, it was going to be about $10 million of additional projects we were going to have to spend on site, so with County Council’s foresight, and frankly courage at the time, this project was delayed; and that delay was unfortunate. But when you walk around today, what you’re going to see is a truly responsible building; it’s actually a building where, when the taxpayer walks through, you’re not looking at the Taj Mahal; you’re not looking at a whole lot of fancy things all over the place; it’s a responsible building. It fits actually the rest of this structure.”

For many departments, the expansion offers more room to grow, along with improved technology—including better phone, internet and radio connectivity, and enhanced public safety. Specifically, certain departments, including the 911 Center and Emergency Operations Center, feature restricted public access, allowing employees only to enter and exit the facilities. In addition, the new Emergency Operations Center is rated to withstand a category 5 hurricane.

The new 911 Center also includes a “quiet room” for dispatchers to relax and de-stress and sleeping quarters for employees to utilize in the event of an emergency. Additionally, each dispatcher workstation is equipped with special lighting to allow supervisors to watch how long a dispatcher has been on a call.

The added space at the Voter Registration and Election Office allows room for three additional workspaces for employees and eight more workstations for absentee voting. Not only will staff be able to more efficiently serve voters, but also, the large, open hallways will provide more room for voters to wait in line inside the facility. However, the expansion not only benefits those departments that moved into the new space, but it will also help other departments find new homes.

Berkeley County EMS is going to inherit the former 911 space; the Sheriff’s Office investigation unit is going to move in to the former EOC site; and as County engineers from Water and Sewer move over to the expansion, the Veterans Affairs Office will assume its space.

The current County Administration Building has been in its location since 2005 and was previously a K-Mart. Berkeley County purchased the former Food Lion building in 2014, two years after the supermarket closed.

Next:
County to Hold Groundbreaking for Railroad Avenue Extension